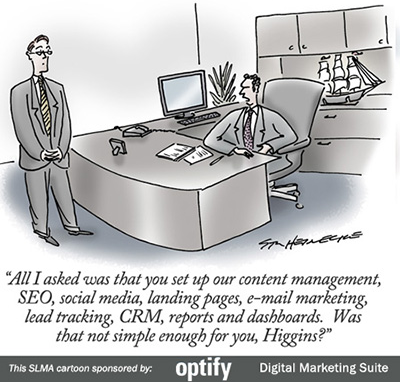 You know the feeling – you have a long list of tasks and you have no idea where to start. Your boss (or clients) is expecting results and he wants them yesterday. It sometimes seems like just by buying and installing a marketing automation software solution you will solve all your problems. But you know it’s not true. Digital marketing is not a simple problem, it’s a complex problem that includes multiple components and variables that have interdependency and impact each other in ways you can’t sometimes predict. So when faced with an overwhelming list of tasks, how do you even start?

In his book, The Checklist Manifesto, author Atul Gawande describes the use of checklists to reduce errors in various professional fields including medicine, construction and business. At some point in the book, Gawande describes the differences among three types of problems: simple, complicated and complex. He used a paper by two professors who studied the science of complexity — Sholom Glouberman of University of Toronto and Brenda Zimmerman of York University. (You can read the entire paper here)

“Simple problems like following a recipe may encompass some basic issues of technique and terminology, but once these are mastered, following the recipe carries with it a very high assurance of success.

Complicated problems contain subsets of simple problems but are not merely reducible to them. Their complicated nature is often related not only to the scale of a problem like sending a rocket to the moon, but also to issues of coordination or specialized expertise. Complicated problems, though generalizable, are not simply an assembly of simple components.

Complex problems can encompass both complicated and simple subsidiary problems, but are not reducible to either, since they too have special requirements, including an understanding of unique local conditions, interdependency with the added attribute of non-linearity, and a capacity to adapt as conditions change. Unavoidably, complex systems carry with them large elements of ambiguity and uncertainty that are in many ways similar to the problems associated with raising a child. Despite the uncertainty associated with complexity, all three kinds of problems can be approached with some degree of optimism: we do look forward to raising a child despite the complexity.”

So when I sat down with a colleague to discuss some lead generation tactics, I was reminded of the types of problems we face in our professional lives, especially in B2B marketing. I took the opportunity to construct my own table using marketing challenges:

What’s interesting about these definitions is that they don’t necessarily define the severity of the problem or the level of expertise needed to solve it. For example, sending a marketing email is a simple problem but might be difficult to solve without a detailed process, knowledge of best practices and the right tools. In his book, Gawande offered checklists as a way to reduce errors and in marketing we find checklists as ways to ensure success.
One of your most important checklists is your task list. I personally like the old school version – a piece of paper with my weekly tasks – but there are more appropriate methods to handle your tasks list in the 21st century like online to-do lists or apps, project management tools and smartsheets.

Whatever your method is, if you’re a good marketer you probably have more tasks on your list than time in the day. So what do you do when you have so many tasks to tackle? How do you prioritize your marketing task list to ensure success?

Rule #1: Start as close to revenue as possible.

Rule #2: Break complicated problems into their simple components and start with them.

As mentioned above, complicate problems are ones that consist of subsets of simple problems. By breaking them into their individual, simple components, you’re more likely to start seeing progress early. Start with the simple problems that you think will have the highest impact on the entire problem. For example, if your problem is building a lead nurturing flow (a complicated problem), break it down to the simple components: creating the emails, building the flow and building the audience for each email. The one that will have the biggest impact on the entire problem is building the flow since it will help you outline the emails and audience as well as define the cadence.

Rule #3: Start with the big rocks and then add the rest.

Stephen Covey wrote about the story of The Big Rocks. It’s about a business professor who used a jar as a metaphor for prioritization and made the point that if you don’t put the big rocks in first, you’ll never get them in at all.

Unlike the Big Rocks concept, the low-hanging fruits method tells you to focus on the quick hits first. Be done with all the small tasks that take little time but consist of the majority of your task list. If you get them off your plate, you will be able to show some immediate success and also clean your list and make it more manageable.
I like to build my schedule with a combination of both Big Rocks tasks and low-hanging fruits. It allows me to make progress on my big projects but also show some results on a consistent basis.

Rule #5: Just start from something.

A long list of tasks could be very overwhelming, but the last thing you want is to be paralyzed by the amount of work you have to do. Spending time trying to think about where to start will get you nowhere, so in lieu of clear priorities, just start from something. It will get you in the mood of action and will allow you to start taking things off your list.